We woke up in our adorable hostel, Sweet Peas, in Asheville. This was one of the nicest, cleanest, most organized hostels we’ve ever been to ( and we’ve been to a lot!!). The owner must have done a lot of travelling before opening Sweet Peas and did an excellent job! We took note of their details in case we eventually open once myself! Thanks Sweet Peas!

We drove across Asheville to Sunny Point Cafe at the recommendation of the sweet guy working at the hostel and had the BEST breakfast of the trip! Leah had amazing huevos fucheros (huevos rancheros with tofu chorizo instead of meat which are among the best in the country) and Gill had a delicious breakfast sandwich! They had the best coffee of the trip so far – organic and locally roasted. We split a white chocolate peanut butter tart for dessert – unreal!

We set off for Biltmore Estate only to find out that we can’t even enter the grounds without a $70 entrance ticket…. Each. Sorry Vanderbilts, just can’t justify that with so much more to see! 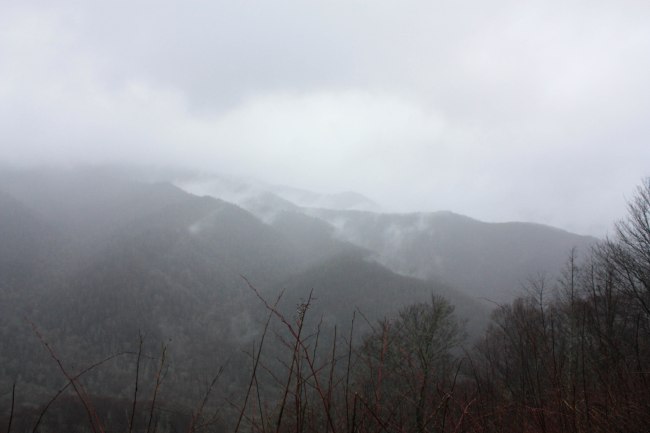 We jumped on the freeway and followed signs to the blue ridge parkway but ended up in Canton, NC where a kindly man in the visitor info centre informed us that I (Gillian) spoke English well. HAHA! He was just adorable and informed us that the Blue Ridge Parkway would likely be closed between Canton and Cherokee, and that the road through the Smokey Mountains would be very low visibility and/or bad weather, so we should probably go on the I-40 to Knoxville. Well, after promising to visit him again if/when we came back to Canton, we proceeded to completely ignore him and take the road through the Smokey Mountains National Park (but not the Parkway!). It was a foggy, rainy, at times snowy, drive, but beautiful and not bad road conditions at all. We were totally mind boggled at all the “Native American Indian” tourist traps all throughout Cherokee and then on the other side of the mountains, basically from Pigeon Forge, straight through Sevierville. It was incredible. So tacky looking, so exploitive looking…. ALSO! Totally different topic, but we almost ran over 3 puppies who were randomly on the road before Cherokee. We thought they were wild animals at first, then realized they were puppies of some sort, then pulled over to the road a little ways down and wondered if we should go back and pick them up, but they had gone off the road and we had no idea where to drop them off and/or if they were harbingers of disease that would render Leah’s fragile health even worse. 😛

So, Pigeon Forge and Sevierville, the tackiest, circus sideshow-esque towns I have ever seen. Signs included: stuff, spelled ‘STUF’, ‘pan fer gold’, and multiple places with ‘hillbilly’ in the title. The outlet mall was decent though. AND people have the cutest accents.

We finally arrived in Knoxville around dinner time and headed to Market Square for some nosh. Leah found Gillian some astronaut ice cream at Urban Outfitters, which we had just been talking about at Liam and Gisela’s the other night. Gillian was SO excited. We had an AMAZING dinner at Tupelo Honey Cafe, which Leah had wanted to try the last time she was in Knoxville. It was FAB. Gillian had brown butter butter brussels sprouts and a veggie melt that consisted of fried green tomatoes, lemon aioli, caramelized onions, sauteed mushrooms, roasted red peppers, spinach and melted havarti cheese openfaced on sourdough wheat bread, and Leah had a 3 cheese, 2 meat grilled cheese with cheesy onion bisque. YUM! They also serve homemade biscuits with blueberry jam as an appetizer. Very reasonable prices too.