We set out nice and early for Universal Studios, and for once, arrived EARLY! Apparently the theme of the park is “upselling” as the parking attendant and the ticket dude both tried to get us to upgrade to better parking and a season’s pass of some sort even after repeatedly telling them no, thanks! No wonder it took so long to through those two lines! 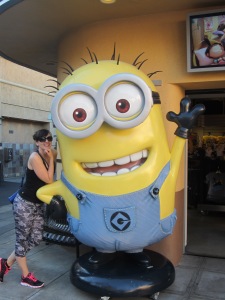 When we finally got in to the park, we headed for the studio tour first. Our tour guide was awesome, very well-spoken and funny. The tour took us throughout the backlot where things were actually filming, such as The Mindy Project, and through a really cool 4D T-Rex vs King Kong ride. 4D involves the picture (in 3D) as well as the sound, movement, air movements, AND t-rex “spit” aka water.  We also saw sets such as the airplane wreck from War of the Worlds, the Bates Motel from Psycho, Old Mexico (and the flood, as seen in Big Fat Liar), an Old West and a European town, among others. It was very interesting.

After the studio tour, we commenced with the rest of our days activities. We went on: Jurassic Park (my face on the photo at the end of the waterfall was hilarious – all scrunched up and terrified), the Transformers 3D ride (my eyes were shut half the time), the Simpsons ride, and Leah rode the Mummy ride (I abstained!). We also saw the Animal Actor’s show (so cute!!), the Waterworld show (very flashy and fun – hilarious how the actors would get the audience soaking wet), the Shrek 4D experience (really fun!), and the Special Effects studio, which was informative and interesting.

We also took the time to head out to the front of the park, where Extra was taping. Maria was interviewing Chris Meloni and Dean Norris. We got a picture with Chris, who slapped a big ol hand around my shoulder. Never washing it again. Just joking, took a shower the second I got home cuz it was a hot and sweaty day. I had a brookie (a brownie cookie) and a churro, clearly a well-balanced theme park menu, while Leah partook in cheese fries, popcorn, and frozen pink lemonade. Overall, it was a fun day, and reasonably-ish priced, considering the maintenance of the park, and the salaries of all the employees we encountered during the day.

One thought on “Universal Studios”