So picking up from where we left off, we met up with our group for the day.  We went with Woop Woop Travel (hello awesome name!) and Ali was our awesome tour guide for the day. He was super informative,  quite funny,  and totally called me out for falling asleep on the bus in the afternoon. But he understood. … night buses are hard!
Our first stop was Uçhisar. This used to be a strategic point in the region given its height and is often referred to as a castle,  although it’s not. At this stop,  we somehow picked up our first new friend,  a fellow from Bangladesh. Don’t know where he came from or how he joined our trip but he did! 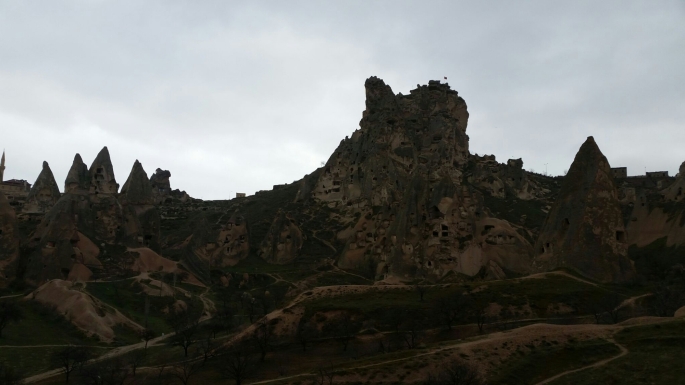 You can see many pigeon holes here and that’s quite cool. Pigeons were previously used to carry messages in the area.

Carrying on,  we checked out the Urgup family chimneys,  which are meant to look like a family of three.  At this point,  we were really starting to feel the cold. It was shocking considering the week before,  it was 18 degrees and sunny!

Our next stop was at Devrent Magic Valley, also known as Imagination Valley. Here,  the different rocks have different formations including the Virgin Mary, a crocodile, and ducks kissing. We didn’t have time to look around here much as we were moving along to Paşabağ Fairy Chimneys. Me to Leah just now (2 days later): “Did you take anything useful or interesting from the fairy chimneys I could share on the blog?”
Leah: “Nothing comes to mind”

Terrible? Well, perhaps, but keep in mind we’d had somewhere around 2 hrs sleep the night before and it was bloody cold out! Mostly, it was just super cool landscape here and the shape of the columns were more unique here than in other places. 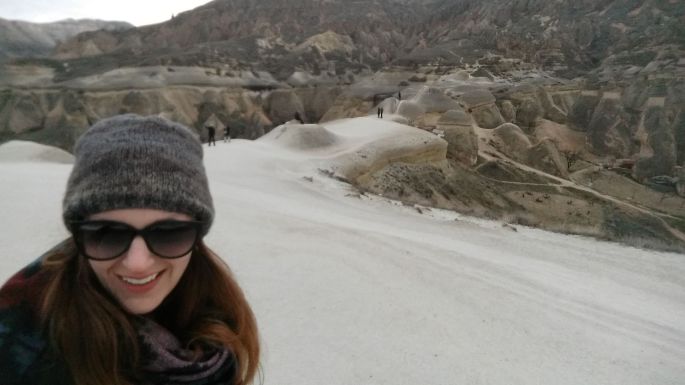 After some free time here we motored onwards to lunch at Aydede Restaurant. We tried the traditional pottery baked stew. It was awesome! Definitely recommend to try this when you’re in Cappadocia. It’s pretty popular here so it would be surprising if you weren’t offered it at some point. Also, I have to note that this was the BEST tour lunch we’ve had so far in the trip. Two thumbs up!

After lunch, we stopped in at an old Greek village called Çavuşin. These cave houses used to belong to the Greeks that lived in the area before being kicked out back to Greece. Now, they are mainly uninhabited. Here we picked up two more “friends”, a Spanish couple. Don’t know how Ali kept finding us new friends but he was sure good at it!

Next, we had a stop in Avanos, which is famous for pottery. We watched an awesome pottery demo here,  where they showed us how to make a teapot!  So cool. We were wishing we could take some stuff home with us but 3 more weeks and weight restrictions wouldn’t permit it.

From Avanos, we made a stop at the famous Göreme Open Air Museum. It was once a monastery and thus has several beautifully preserved churches in it.  These churches are located within caves. Unfortunately photos are not permitted inside. It is a very beautiful site but we were freezing cold at this point and hugely ready to move on….to the gift shop,  where I got a Turkey tee to act as a new piece in my rapidly shrinking wardrobe. Things seem to be developing holes and we have yet to do laundry not in a sink. Ah the traveling life…

After one more pit stop for a beautiful vista of the landscape we headed back to our hotel.

We were staying in a really cool cave room. Something they don’t tell you about a cave room is that the cave drops dust and bits of cave randomly on stuff. It’s kinda cool actually,  like the rooms are living.  At this point,  I have to give a big shout-out to the showers here at View Cave. Not only was it hot but the pressure was AWESOME. Totally made our long day better!