March 28th, 2015
Petra to Wadi Rum: Yellah! We set off bright and early from Saba’a on our mini road trip with new friends, Wei Wei and Dawson. A short 2 hour drive later we found our way into Wadi Rum with ease. Truly,  if you have a map, a smart phone, and keep your eyes peeled for signs, you do not need a GPS to find your way around Jordan.

We encountered a slight hassle at the gate as Mehedi said we would with people hassling us and saying they would take our money and give it to the visitors centre, etc. Ignoring them and going to get the tickets with success, we proceeded on. I don’t know why I was thinking that we were looking for a Bedouin Directions sign but we carried on through the village, despite the multitude of killer speed bumps and the 4Runner that flashed its  lights at us…after pulling up the directions  and realizing that we should have met Mehedi at the rest house (first building on the right) and the car flashing its  lights was probably him we turned around and sure enough, found him waiting there. We left Wei Wei and followed Mehedi to him house for some tea and to meet the rest of our group, a lovely set of three friends studying at uni in Singapore and our guide Ayed.

A brief synopsis  of our stops (included in the ‘Mehedi Special Jeep Tour’):
1. An old Nabatean temple  just outside the village. If you haven’t seen ruins before or are a big fan of ruins then it’s worth a visit. Otherwise,  skip it.

2. Lawrence’s  Spring. Situated on a hill
a short drive from the village you can scramble up the rocks to see it. The spring is not too exciting but the view is great and the resident lizards are charming (if you’re partial to amphibians, that is).

3. A short canyon with pools of water at the bottom and some beautiful inscriptions along the sides.

4. Inscriptions and a red sand dune. Dune: hard to climb up, extremely fun to run down.
Inscriptions: used many years ago by the caravanserai to show the way and leave messages.

5. Lawrence’s  House – again not too too much to see here in terms of historical structure, but it’s an easy scramble up the rocks for another stunning view.

At this point we broke for lunch, which involved starting with dessert, always a good sign in my books. Ayed and Muhammed (who was going to lead us up to Burdah Arch) set to cooking lunch while the rest of us charged our batteries and chatted in the shade. We enjoyed the simple but filling veggie stew-esque meal they prepared along with the ever-present pita and hummus accompaniment.

With our bellies full, Ayed dropped us off with Muhammed to do the hike/scramble to the arch. This was absolutely beautiful and super fun to climb up, but also challenging at points. The long legs really came in handy at this time! 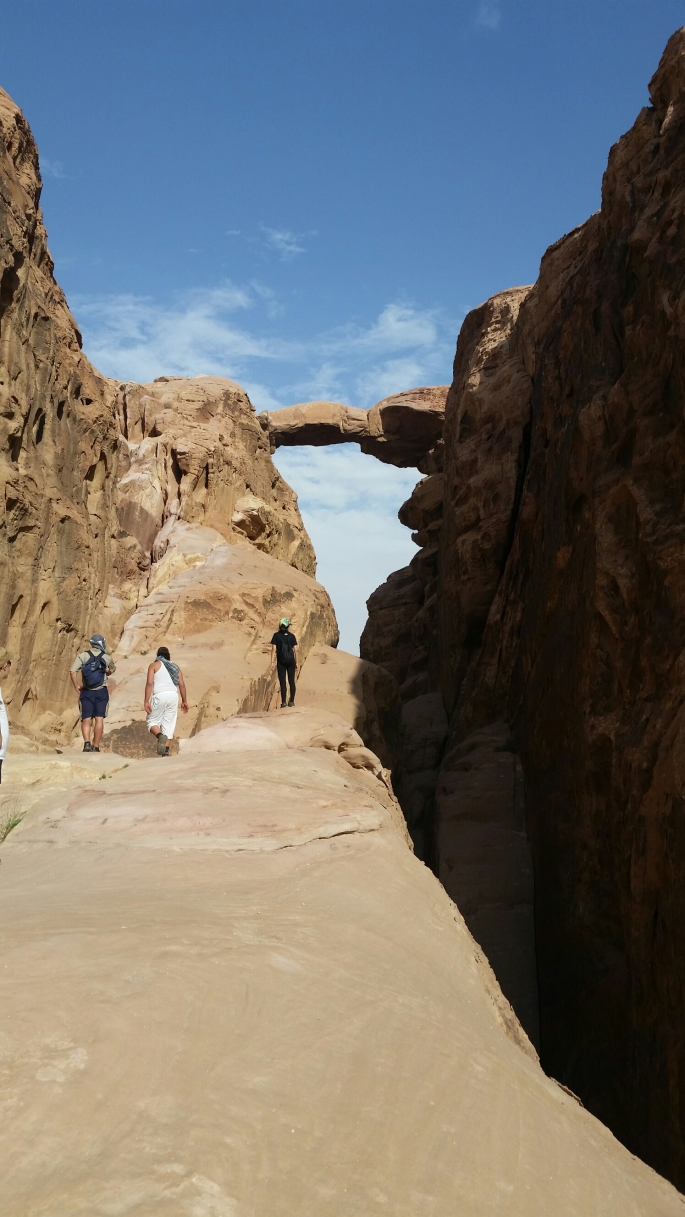 We made it to the top and enjoyed the beautiful view immensely, the occasional gust of wind as we crossed the arch itself just adding to the thrill.

While coming up, we had asked if it was the same route down as up because it seemed quite treacherous at times and we were told it was. So, the journey down was interesting to say the least! Firstly, Muhammed would essentially run down these cliff faces with the ease of a goat with suction cups for feet then look back at us and go, ‘Yellah!’ (Arabic for let’s go, a phrase we heard numerous times!). Secondly, he kept trying to trick us with the direction, then giggle, and point in entirely the opposite direction. And our supposed pal Dawson, a climber extraordinaire himself, did his best to lead us off track once or twice. It’s ok, you can still come to Everest Base Camp with us. 😜

Anyhow we did make it back down, and Ayed said we were quite fast in fact! We headed for the small arch next, no big deal after what we’d just done!

Our final stop was to try and view sunset. As we pulled up to the dune we were to watch from, we couldn’t believe our eyes….it was Green Dress from the day before! In the same green dress, prancing about on the dune. Unbelievable! Luckily they didn’t stay too long and we were able to enjoy a little sunset (and make a sand angel, if you were me!). Because it was sandy, our sunset wasn’t the best, but we enjoyed the relaxation! 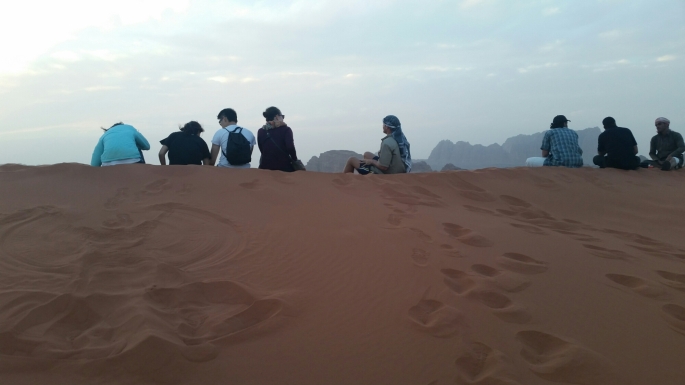 Finally, we headed back to camp for some delicious dinner. It was very filling and some of the veggies and some chicken were dinner in the traditional way in the fire in the ground. Yum! A few games of cards later and we were headed to bed to recover from a long day.