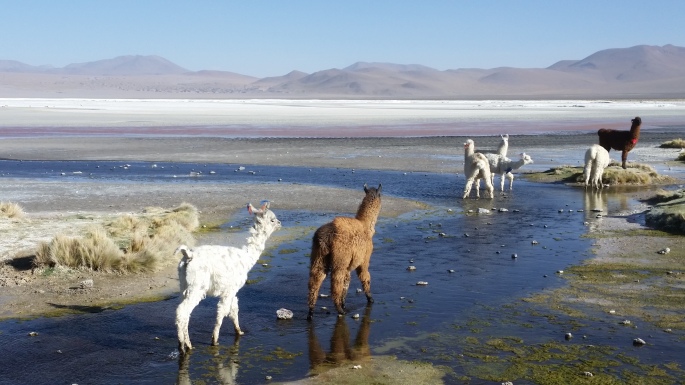 We were picked up early and headed for the Chilean/Bolivian border – there was no time for coffee, although it seemed very much like a hurry up and wait situation! We had ordered from a street vendor by Chilean customs but they seemed to be a one pot operation making the coffee production rather slow. This lead to our driver corralling us back to the bus, before our coffee was ready, sharing sips quickly with the kindly Joost and Janne who had successfully received their coffees but were not allowed to take them on the bus! The vendor of course was quite mad at bus driver, a dramatic shouting match showcasing the expressiveness the South Americans are known for!

We drove up past two volcanoes on our way to the Bolivian border. They are incredibly beautiful and next trip, I hope to be able to climb one of them. The border area….brrrr! Windy and cool! DEFINITELY wish I had packed a few more warm layers! We discovered there were banos all around, when we requested a washroom and the guides just gestured all around them. Grab a piece of tissue and help yourself! >.<

There are fees at the Bolivian border and the national park office, which are typically not covered by the tour providers, so keep some Bolivian money set aside for this.

Our guide, Nelson, was excellent. He did not speak a word of English, really, but since the only other male in our group, also named Nelson, was a native Spanish speaker, he was able to translate the important parts for us. We packed into a Toyota 4×4 that Nelson took great care in keeping neat and clean, our luggage strapped up on top and us 6 all sandwiched in cosily. Our group consisted of: me and Ellen, a pair of sisters from Ireland, Niamh and Emer, Nelson from Chile, and his friend Sandra, from Germany.

Nelson (our driver) had some excellent music on deck, mainly Bolivian folk-y type music in general, interspersed with a select few 80’s hits. Perfectly surreal to groove to with the surreal scenery around us. We started at Laguna Blanca and Laguna Verde, surrounded by volcanoes.  Here, we got our first taste of flamingos. WOW! They are absolutely beautiful birds. 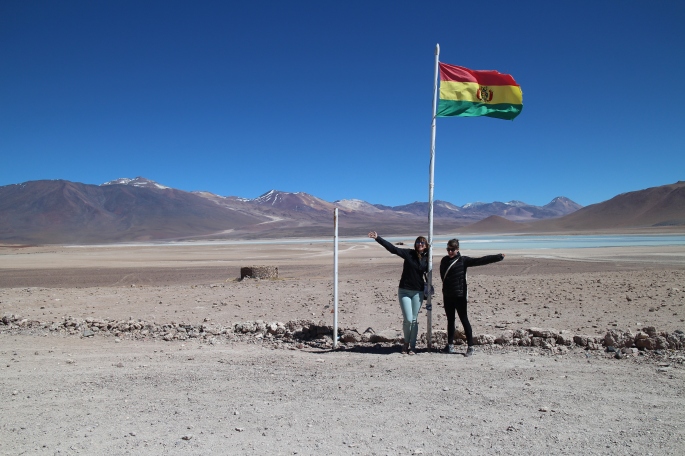 We continued through the moonscape-like desert to the so-called ‘Dali Rocks’. The Irish girls had the brilliant idea of doing running panoramic shots. We would start at one spot while the picture taker slowly panoramed around. As soon as we were out of the shot, we’d run around behind and pose on the other side of the shot just at the camera hit that spot. Doubled! This was super tiring in the decreased oxygen environment but fun. Shortly after this, I discovered that my fingernails looked like the red, white, and blue ice cream cones probably due to the lack of oxygenation. Yikes!

The natural hot springs were the next stop on our tour (also at an additional cost to get in). Ellen and I didn’t go in because of the cold (not wanting to get wet), and the small and crowded nature of the pools, and instead walked around looking at flamingos instead. We were able to get quite close, so surreal! Apparently the hot springs were very nice tho. 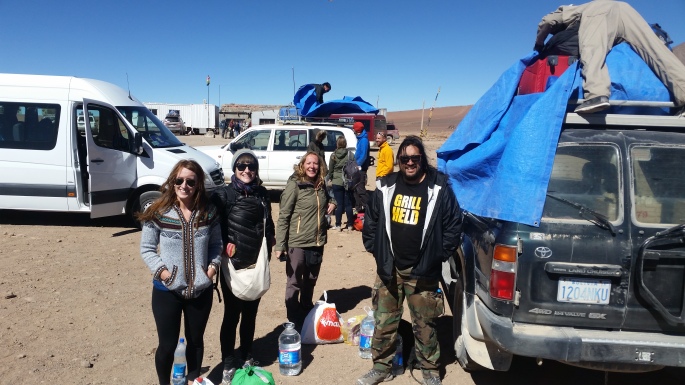 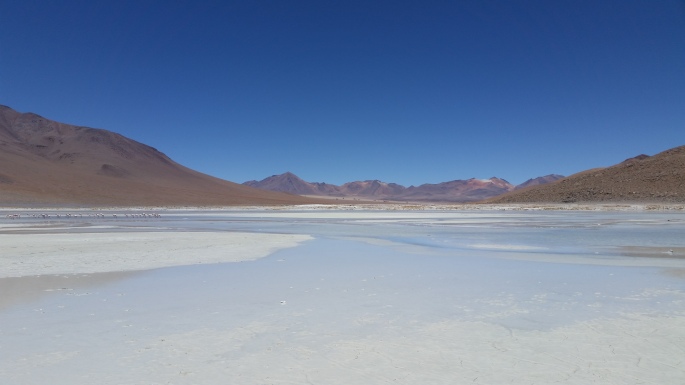 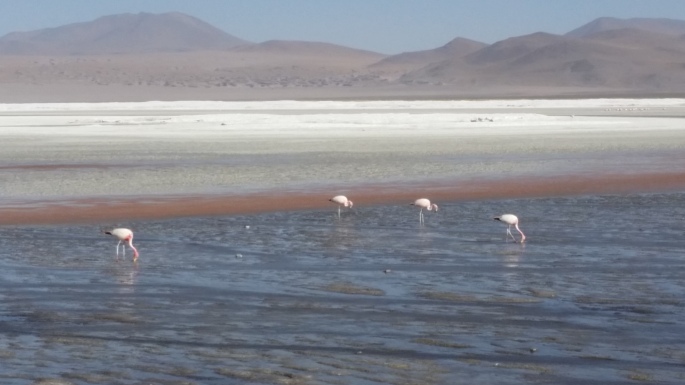 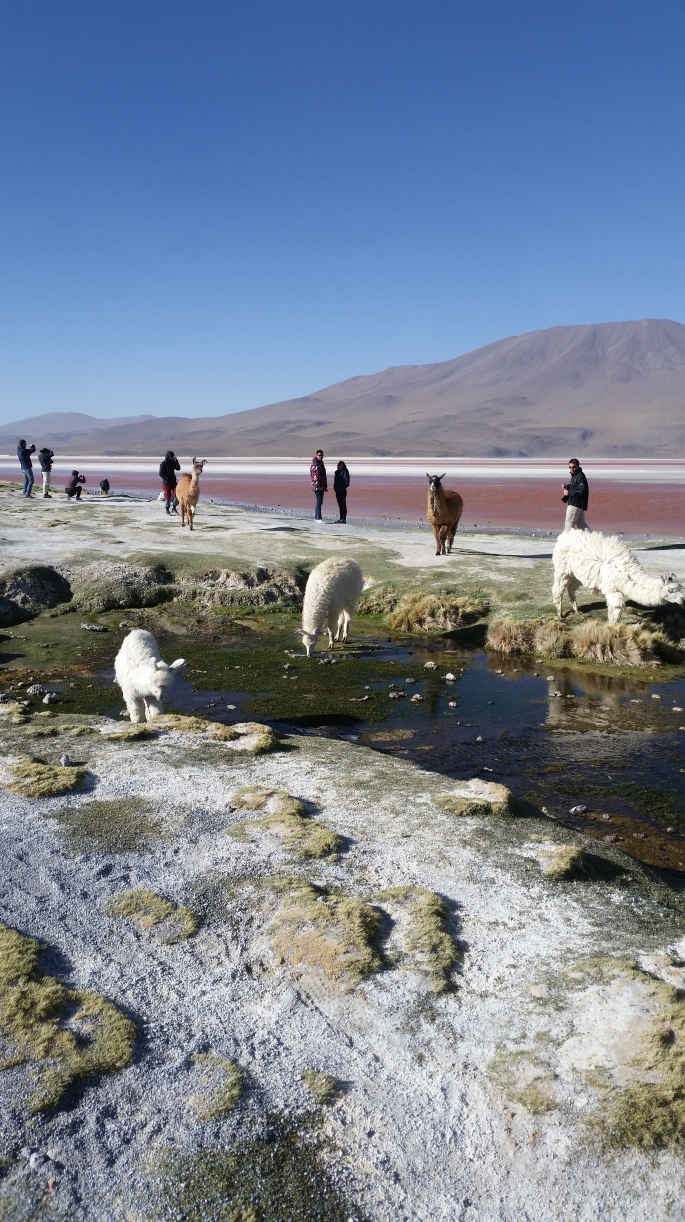 We next took a brief visit to the Geysers, which were not as good as Yellowstone. This was also the highest point in journey (4500m), making it both very cold and tiring. I felt overall pretty good, but just slow. Others in the group were really feeling the altitude.

We had a tasty lunch at the refugio where we were staying for the night once we got there and were then able to take a rest.  I got a headache, really my only symptom of being at altitude, apart from being stuffed up, especially when lying down. I took an ibuprofen and that seemed to fix me right up, along with a snack and some water. I was feeling quite lucky to have such mild symptoms at altitude, unlike some of the others who were very headachey, weak, and nauseous.

After a brief rest, we set off for Laguna Colorado. It. Was. Amazing. There were SO many flamingos in the waters, eating, sleeping, flying. Plus…there were llamas! Laguna Colorado, means the coloured/red lagoon and indeed, the colours = wow. We were feeling pretty good and took lots of fun photos, pretending to be flamingos, and otherwise goofing off.

Back at the refugio, we tried some coca tea, reputed to aid in altitude acclimatization. I was feeling just fine at altitude, thank goodness! We rested, chatted and then took supper, which was a pretty decent soup and spaghetti. I rallied the group for a birthday song and birthday snickers to Ellen.  She made a brief speech, we all cheers-ed her and wished less altitude sickness upon her! ha!

Our evening was topped off by the stars. Wow. Stupendous! So clear without any interference from city lights, we could see satellites and shooting stars.

I planned out my clothing for the next day, layering being very important. It was not too cold in the sunshine without the wind blowing, but with wind and any decrease in sun, it was quite cold. With all this planning, one of the Germans called me very German! I was touched. Haha! I wanted to do some laundry as my undies situation was starting to reach critical, but after much discussion decided that they may not dry quickly enough and a ‘knickers flag’ clothesline streaming off the car the next morning to dry, may not be appreciated by Nelson y Nelson!

An amazing first day in Bolivia!