The theme of this trip so far is walking….lots of walking…. both Leah and I are starting to feel it realllll good. My “lower frontal calves” (also known as shins…I couldn’t think of the word earlier today when I was describing the area to Leah, so I just accurately described it as best I could!) and Leah’s hip are letting us know we probably should’ve trained for this trip.

We began our day with more leftover Christmas treats (thanks Susan!). They saw us full til about 3pm yesterday, so we figured they might do the same today. Plus we’re on vacation. That means we can eat whatever we want without gaining weight. Fact. After catching ye ol subway down to the Financial District-ish, we found ourselves just by the 9/11 memorial. It’s amazing seeing the rebuilding effort going on, but also haunting knowing what happened there. Sidenote, purchasing a pretzel in that area either requires the skill of a conman or the presence of mind to look as un-touristy as possible to avoid being overcharged. I mean, $5/pretzel…gimme a break!

So this time, we went to the TKTS at the South Seaport Market location. Heads up – the line is significantly shorter than at Times Square however, they don’t have all the shows nor do they have same day matinees. We queued up by 10:30 and had the pleasure of the kind gentleman in front of us striking up a conversation. He was both interesting to talk with, a former Montrealer we found out, and great at giving some recommendations about the city. We hope he and his family enjoyed the show they saw this evening! We decided to go with First Date, after much debate. There is just so much selection and tonnes of excellent choices. 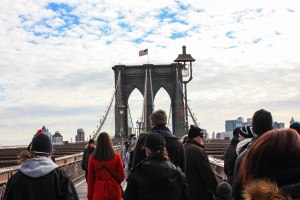 The Brooklyn Bridge was next graced with our presence. Let’s just say I’ve developed a deep dislike for strollers and strongly believe that NYC should probably figure out some sort of bridge walkway widening solution. I feel bad for those people trying to bike and run over the bridge amoungst the tourists. I was pretty stoked to find some locks of love there too! They are popping up all over the world, which makes me so happy. We did a halfway walk then hot-footed it back for a coffee, which we found at the juncture of Fulton and Gold at a place called R & R coffee. Awesome small business, locally owned, and FAB coffee. Highly recommend! Coffee in hand, we strolled along the seashore, where we got some pics of the cityscape and the bridge in the background. Sidenote, if we ask you to take a picture of us in front  of some scenery, it means we actually want the scenery in it! We zigzagged up through the financial district to see the stock exchange and the bull, and then down to Battery Park to view the Statue of Liberty. It was such nice weather out, we were sweating in our jackets and had to de-layer significantly. Sayonara Canadian winter! 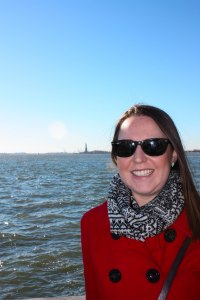 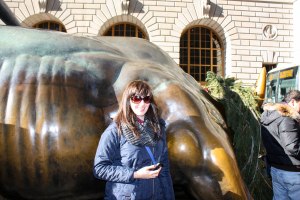 SuteiShi was intended to be our lunching location, and we hightailed it all the way back from Battery Park to S. St Seaport and according to urbanspoon it was open, however, upon arriving there, it was most certainly closed til 3. We tried Urbanspoon’s second choice, which wasn’t even a real place! Sad face. Instead, we ended up gettting empanadas at Ruben’s Empanadas, on Fulton just down from Gold St., which were amazing. It was really affordable for NYC too; just over 11 bones for a drink and 2 empanadas.

Since we’d done so much walking that morning, we concluded we deserved to subway back up to Times Square area in preparation for dinner and the show. Leah was thinking about going up Top of the Rock, but once she found out the next available elevator time wasn’t til after 7pm, she scrapped that idea. Instead, we took a peek around Sephora and Anthropologie. So many people seem to think that New Yorkers have a bad rep for being unfriendly, but honestly, I have found everyone we’ve encountered to be amazing, both this time and last time I was here. The people in Sephora were even trying to find me a hairdresser! To avoid another sushi fiasco, we downloaded the Sephora employees recommendation of Yelp and went to Monster sushi (W 46th St between 5th and 6th), which had also been recommended to us by our hosts roommate. It was pretty darn delicious and not too overpriced. I ordered the “Unbelievable Roll” which was delish, and the “Philadelphia Roll”. SO GOOD! 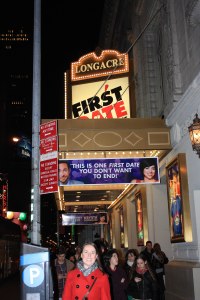 We were ready to hit the theatre by this point. We had a quick drink at the bar just down from the Longacre Theatre then headed in for the show. The show was TERRIFIC. Great comedy, great singing, overall entertaining time! It runs 1h30m with no intermission, but the time flies by. The singing was excellent and the actors were all very talented in their roles. There was an AWESOME song, called Bailout, which we will now just hum to each other and break out into laughter. You can dl is from the First Date website.

After the show, we decided to stay for the actors leaving by the stage door, which I had never done before (apparently most theatres do this). We got our playbill signed by the entire cast and pictures with and/or of  them. Can I just take a minute and say to the entire cast, how impressed I was at how friendly and interesting you all were. Thanks for making it an even more enjoyable experience for us. 🙂 May I also take a minute to emphasize just how handsome Mr. Zac Levi is…. he came out of the stage door with a mini boom box pumping some awesome tunes and set it down on the fire hydrant and was like, let’s do this! Such a cool experience. We especially enjoyed the older dude standing by us with the bright orange hunters hat and like 800 things for the actors to sign….so cute!

We were also fortunate enough to meet an awesome girl by the name of Edmarie in the crowd. Funny as all get out and studying to become and actor – we wish you the best, girl!! Looking forward to watching your E!True Hollywood Story one day 😉

Finally, we took up the recommendation of our TKTS line buddy and headed over to the Stardust Diner. We had NO wait to get in, however, this is probably owing to the fact that our show was shorter than some of the others and with no intermission. The previous night we saw quite the line-up to get in. Our waiter was called Fritzy Fresh and was very kind (also good at singing). I received a trick straw (one end was sealed) which I thought may mean I won a prize, but according to Fritzy, all I won was a new straw. 😦

We had adult milkshakes aka alcoholic, (mine was DELICIOUS, kind of like a grasshopper pie with creme de menthe and creme de cacao) and some salted caramel cheesecake. So, the unique and wonderful thing about the Stardust Diner, other than its 1950’s diner charm, is that the waitstaff are all actors and sing and dance as you enjoy your meal. They are all over the restaurant, on tables, on chairs, and generally having a good time. They are all aspiring Broadway performers and many people who have worked at the diner have gone on to Broadway. This diner is what the diner in Glee that Rachel, Kurt, and Santana work at is based on. It is so much fun to watch them zip around the resto performing and serving. In fact, you are encourage to join in (the singing, not so much the serving)! It was a totally unreal and fun experience. AND, we saw our ticket line friend and his family coming in the door. Hi, again! 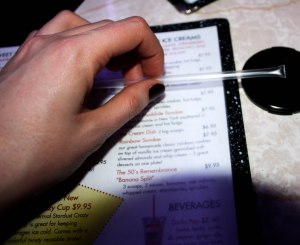 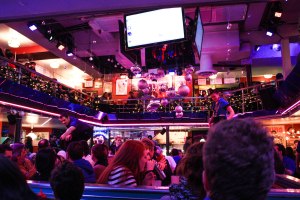 We finally made it home around 1230. NOTE: the C train becomes the A train going uptown at night…so don’t wait around for a C that will never arrive!