Ok, I’m ashamed to admit it as a born and bred Vancouverite, but I hate the rain. As much as I hate cold, I’d rather a beautiful dusting of snow gently falling, than rain any day. So today’s weather, rain, heavier rain, slight droplets, followed by downpour, was most unpleasant to go exploring in. We knew it wasn’t going to be nice today, so we had planned to do the museums via a brief walk through Central Park from the apartment on W. 92nd to the museums on E. 80-88ish. After yesterday’s shenanigans, we ended up sleeping in quite late anyhow, so by the time we set off it was about 1230.

Probably not so shockingly, there were a number of crazies in varying degrees of dress out running around the park as we beelined our way through. I personally prefer to save my running in the rain for those very angsty type days.

We decided to hit up the Guggenheim (or Guggyheiny, if you’re Leah, or that kid from Nanny Diaries), first of all. The line was around the block, but we stuck it out and after about a half hour, made our way in. This building is absolutely beautiful on the inside. Up close, not so much, but the general design and architecture make it so. There was an exhibit of Christopher Wool‘s work on the walls of the main rotunda, plus the usual collections of people such as Picasso and Degas, and other sculptures and art. There was quite a cool shroud by Doris Salcedo, which consisted of rose petals sutured together, named ‘A Flor de Piel‘. Overall, it was a great experience. 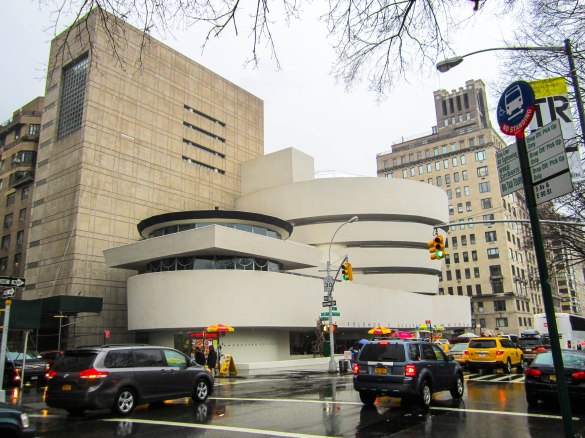 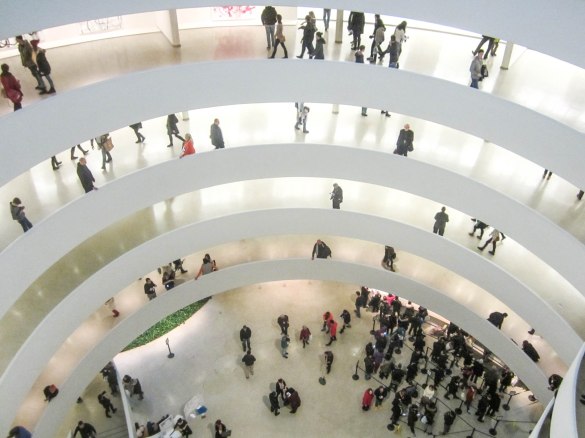 To feed our starving bellies, we ended up at Tandoor Oven, on 83rd, just before 3rd Ave. We had originally intended on going to another place over on 2nd, but were feeling rather drowned rat-ish, that we just slipped into this place. I wouldn’t say that it was the BEST Indian food I have ever had, but it was certainly palatable. The bathroom situation was somewhat sketchy however, as when I went back there to use the ladies, I pushed open the unlocked door to find our waiter on the pot. HA! I ended up using the men’s, which seemingly had just as sketchy a locking device, but made out ok in the end, with no unannounced visitors popping in on me.

After lunch, we decided our walk back to the apartment could not happen without coffee, so quickly scooted over to the Coffee Bean and Tea Leaf on the corner of 83rd and 3rd. Coffee Bean and Tea Leaf reminds me a lot of Korea and was my favourite coffee chain store there. It was almost as good as in Korea. We decided to forgo the Met this time around as time was becoming of the essence and we we a) cold and b) tired, so made our way back through Central Park to the apartment to warm up.

Tonight we plan on hitting up some sort of dessert place and then packing for our sojourn through Philly and Baltimore to Germantown, MD.

And we checked the forecast….hopefully no rain!